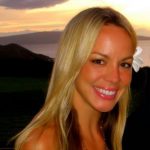 Say these words out loud. Perhaps, if we are honest, they don’t always feel true. We can say the words, “I am strong,” while deep within we hear, “I am weak.” The weaknesses we feel can come in all shapes and sizes. Perhaps they are in the form of a sin we battle or an insecurity we are plagued by. Or, maybe we feel emotionally weak, spiritually inept, or that we lack the self-discipline required to be or achieve all that we desire.

To us, it seems that our weakness is the very thing that keeps us from getting from here to there. The people we idolize, that have “made it,” don’t seem to have it. Instead, they seem to be strong. In our minds, the difference between them and us is our weakness, right? Wrong.

My desire to get all I can out of the life God has given me has been hindered time and again by perceived shortcomings. Lately, I have been driven to study the lives of powerful women throughout history who have lived the kind of life I would love to live, and man, has it been insightful!  I want to share a little bit about some of these historical women whose examples of faith and strength inspire us to this very day. Yet for each, behind the glory lies quite a story. In the end, you will find that these heroes look more like us than you’d have thought.

This woman lived a life fully devoted to her faith in Jesus Christ. Her influence was not only in the church, but spanned into the political realm as well. She was faithful to help the poor and sick and her example resulted in the conversion of many. However, she was known to practice what they called “extreme abstinence.” At times, she would live only on communion, basically. It got so bad that her peers became concerned about her health and appearance. She claimed to not be able to eat. Many say she battled severe anorexia. Was she perfect? No! She was complicated and struggled deeply. Yet, despite it all, in her life and legacy, Jesus won.

Maria felt called to preach during a time when women did NOT speak in the church. Her first sermon was preached in the “Devil’s Den,” where they would humiliate travelling evangelists and run them out of town. The first night she preached, they heckled her, mocked her, and no one got saved. The second night was the same exact thing. The third night was no different. The fourth night, however, something happened. A powerful anointing came over her, and people began to accept the Gospel message. This occurrence was so miraculous that word about her spread. She would travel and preach as thousands gathered to see this “lady preacher.” Signs and wonders accompanied her ministry, and large numbers placed their hope in Jesus Christ.

Well into her prime, at the peak of her ministry, her husband was caught having an affair. She divorced him, and he was so bitter that he threatened to write a memoir of all of her dirty secrets if she didn’t pay him alimony. She was also repeatedly attacked by religious leaders and the press with false accusations. Her life is so inspiring, yet it was still messy. She had drama like the rest of us. She defied the belief that we have to stop and recoil when life throws us a curve ball. In her life and legacy, Jesus won.

Aimee Semple Mcpherson is one of my favorite women in history. At the beginning of her ministry, she travelled and preached to whoever would listen. Many miracles took place in her services, the crowds grew, and she became very famous. They say she was more famous than any celebrity of her time. She ended up in Los Angeles where she ministered to thousands every single week.

Aimee was widowed at a young age. She had failed marriages. Relationally starved, she made some very poor decisions that were famously aired for all to see. Her drama was ‘all the rage’ among the tabloids. She was so not perfect! She had weaknesses and issues. Yet, in her life and legacy, Jesus won.

In the Bible, we see more incredible women of God whose lives were as messy as anyone’s.

And by faith even Sarah, who was past childbearing age, was enabled to bear children because she considered him faithful who had made the promise. Hebrews 11:11

This matriarch of our faith who is hailed in the “Hall of Faith” is the same Sarah who sent her husband to “make a baby” with their servant, Hagar. She then treated her servant cruelly and sent her and her son running for their lives. Let’s also take into account the fact that she battled the pain of infertility for decades. Sarah faced real pain, made big mistakes, yet in her life and in her legacy, Jesus won.

By faith the prostitute Rahab, because she welcomed the spies, was not killed with those who were disobedient. Hebrews 11:31

Rahab, who was also heralded as a woman of faith was (ahem) a prostitute, yall! Her mistakes and reputation are pretty obvious. Yet, as for Rahab, despite all that was against her, in her life and legacy, Jesus won!

I am personally so encouraged by these women because I am so not perfect! I have made mistakes, battled insecurity, and faced plenty of setbacks. For so long I thought my life needed to be perfect in order for God to be able to use me. Now in my thirties, and still waiting for that “perfect order” to take place, I have realized that it will never happen! If I am to make the most of the life that God has given me, I have to do it now, in the midst of whatever I am facing at the moment. Time is of the essence, and our calling is far too critical to be put on hold. Our weakness is the perfect backdrop for his strength to shine ever brighter. For “His strength is made perfect in weakness.” (2 Cor. 12:9)

I hope that you are encouraged today as well! And, I want to challenge you: don’t wait for your circumstances to be just right before you step fully into the purpose that God has for you! Give him your “now”—as messy as it may be. After all, it is all you have to give.

When God chose you, believe it or not, he knew exactly what he was getting into! He can handle your mess. His sacrifice has you covered. His grace is sufficient to carry you through all the drama, setbacks and discouragement that would come your way. You are not perfect; you are chosen. You are strong, my friend. And I declare to you today: IN YOUR LIFE AND LEGACY, JESUS WON! We want to see every preacher’s kid in heaven!